A customer needs to configure a CAS E&M circuit that will support inbound and outbound DNIS and inbound ANI. Which configuration will accomplish this task?

To define T1 channels for compressed voice calls and the channel-associated signaling (CAS) method by which the router connects to the PBX or PSTN, enter the ds0-group controller configuration command. Below is the syntax of this command:

T1 CAS always provides the ANI/DNIS delimiter on incoming T1/CAS trunk lines. The customer wants E&M circuit so the answer should be C.

+ E&M signaling is typically used for trunks. It is normally the only way that a central office (CO) switch can provide two-way dialing with direct inward dialing.

+ DNIS – Dialed number identification service, also known as the called party number. The telephone number of the called party after translation occurs in the Public Switched Telephone Network. A given destination may have a different DNIS number based on how the call is placed (for example, 800 or direct dial).

In T1 CAS, where are the signaling states and control features carried for Super Frame robbed-bit signaling?

Each T1 has 24 channels ( or 24 DS0 – digital signal level 0) that can transmit 8 bits per channel each. This give us a total of 192 bits. One more bit is used for framing, bringing the total to 193 bits. Super Frame bundles 12 of these 193-bit frames for transport. The picture below shows the structure of a T1 Super Frame 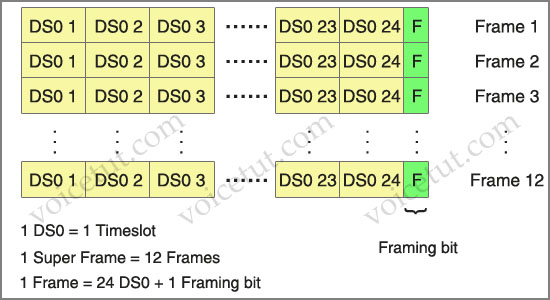 The T1 CAS signaling looks at every 6th & 12th frames for signaling information, these bits are referred to as the A and B bits. The A and B bits can represent different signaling states or control features (on hook or off hook, idle, busy, ringing, and addressing) 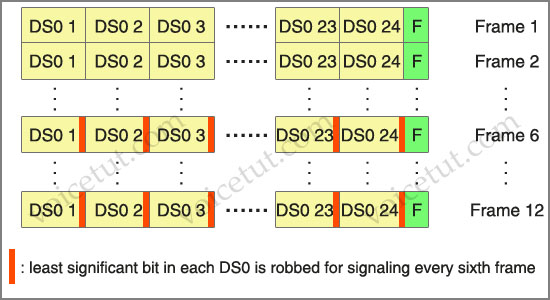 Extended super frame (ESF), due to grouping the frames in sets of twenty-four, has four signaling bits per channel or timeslot. These occur in frames 6, 12, 18, and 24 and are called the A-, B-, C-, and D-bits respectively. So if the question asks about ESF, the answer should be B.