Which type of voice port will allow the gateway to terminate 23 or 30 circuits from the PSTN or a PBX?

The ISDN E1 PRI has 32 timeslots (channels). Each timeslot is 8 bits and has a data rate of 64,000 bits/second. Timeslot 0 is used for frame synchronization and alarms. Timeslot 16 is used for signaling so we can use 30 timeslots to carry calls.

The T1 PRI only has 24 timeslots (channels). Timeslot 0 is used for frame synchronization. Unlike E1 (which uses a dedicated timeslot for signaling) T1 Channel Associated Signaling (CAS) “steals” the 8th bit of the sixth frame for signaling information so we can use 23 timeslots for voice.

Which is the best description of time-division multiplexing?

A. A channel is assigned an exclusive slice of the overall frequency of the circuit for the entire time of its operation.
B. All sources get an interleaved slice of time, which offers the entire frequency range allocated for that timeslot.
C. Individual source signals are combined into a composite signal, which allows a capacity equal to or greater than the sum of the component signals.
D. Technology that increases the transmission capabilities by dividing the medium into multiple channels that are each assigned a wavelength based on statistical analysis.
E. On a T1 circuit, this is the process where 24 DS-1 signals are multiplexed into a single DS-0 channel, while on a T3 circuit 24 DS-0 signals are multiplexed into a single DS-3 signal.

Time-division multiplexing (TDM) is a method of putting multiple data streams in a single signal by separating the signal into many segments, each having a very short duration. Each individual data stream is reassembled at the receiving end based on the timing.

The TDM technology is based on the time, not on the frequency like frequency-division multiplexing (FDM) technology so each timeslot can have any frequency. Notice in the telecommunication field, there are technologies that use both TDM and FDM. The most popular example is GSM (in particular, it uses TDMA & FDMA).

Refer to the exhibit.

Which step of digitizing analog signals does this represent?

There are many definitions about voice encoding but I would like to refer it as the process of translating digital numbers into binary values. It makes us remember the concept more easily. Each time we see a binary-conversion process, we can say it is the encoding step ^^.

Refer to the exhibit. 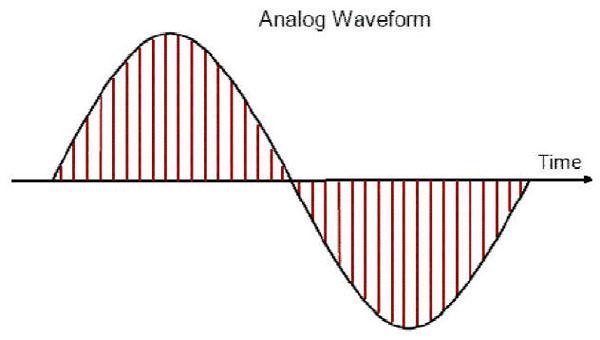 Which step of digitizing analog signal does this represent?

As you can see in the picture, an analog waveform is sampled to covert into a numeric value by a device described in question 2′s explanation. This process is called Pulse-Amplitude-Modulation (PAM). The results of this step are often decimal numbers. Later, these decimal numbers are converted to binary numbers by the encoding process.

What is a numbering plan?

A numbering plan is a world-wide standard to organize and locate telephones all around the world. In CCNA Voice, you often read about E.164 standard.

Which three of these are part of the e.164 number in the ITU-T numbering plan for geographic areas? (Choose three)

The CC consists of one, two or three digits. It is what we add in order to access different countries and often prefixed with a +

The NDC is the code we often call the area code. It is optional but for geographic areas we have to use it.

The SN is for telephone numbering. It is given by your phone operator.

For example, the North American Numbering Plan E.164 is as follows:

E.164 numbers are limited to a maximum length of 15 digits.

Time-division multiplexing (TDM) is the technology of putting multiple data streams in a single signal by separating the signal into many segments, each having a very short duration. Each individual data stream is reassembled at the receiving end based on the timing.

Answer A is incorrect because TDM can transmit multiple voice signals at a time. In fact, it is the most important advantage of TDM technology.

Answer B is incorrect as it says “consecutively”, TDM can transmit multiple voice signals simultaneously.

Answer D is long but not correct when stating “consecutively transmits one voice signal at a time”. Just for your information, D would be correct with this statement:

“Time-division multiplexing simultaneously transmits multiple voice signals at a time over one or more communication mediums by quickly dividing pieces of each signal into equal bandwidth sizes and sending them in the order they are received (first-in first-out). Information from each data channel is allocated bandwidth fixedly, no matter whether there is data that needs to be transmitted or not”.

In fact, we often use some codecs that support bandwidth saving when there is no sound (silence) in a conversation, like G.729b codec.

The Point North Company has a few slow links in its voice and data network. Which two techniques can be used to reduce delay in voice transmission? (Choose two)

First In First Out (FIFO) queuing algorithm is the simplest of the congestion management methods. All packets are treated equally, and placed into a single queue and serviced the order they were received; hence the name FIRST-IN FIRST-OUT. But when talking about “queuing”, we also mention about delay because the queuing time (or queuing delay) is the time a job waits in a queue until it can be executed. In conclusion, queuing increases delay -> A is not correct.

Buffering also increases delay as queuing -> B is not correct.

In mixed voice/data IP networks, packets must be fragmented prior to traversing bandwidth-limited (less than 1 Mbps) connections to minimize voice delay and jitter. Two types of fragmentation that are universal and not limited to a specific link layer technology (such as ATM or Frame Relay) are IP and PPP fragmentation.

IP fragmentation adjusts the packet (maximum transmission unit [MTU]) size for all packets traversing the router. PPP fragmentation splits large packets into multiple smaller packets and encapsulates them into PPP frames before queuing and transmission. Recombination is done at the other end of the link -> C is correct.

Compression of IP, RTP, and UDP headers decreases consumption of available bandwidth for voice traffic. A corresponding reduction in delay is realized -> D is correct. But notice that this method should only be used for slow connection as it will take more resources of the receiving device to decompress them.

One thing I want to notice is that RTCP only provides feedback on the quality of the transmission link. It does not make any guarantees concerning quality of service.

Congestion management features allow you to control congestion by determining the order in which packets are sent out an interface based on priorities assigned to those packets.

With Priority queueing (PQ), packets belonging to one priority class of traffic are sent before all lower priority traffic to ensure timely delivery of those packets.

Increasing priority queue sizes will increase the maximum number of packets the queue can hold for a class policy configured in a policy map. This can reduce delay in high priority class but suffer other lower priority classes.

Transcoding compresses and decompresses voice streams to match endpoint-device capabilities. Transcoding is required when an incoming voice stream is digitized and compressed (by means of a codec) to save bandwidth, and the local device does not support that type of compression -> D is the correct answer.

Which codec is less processor intensive?

G.729a is a compatible extension of G.729, but requires less computational power. This lower complexity, however, bears the cost of marginally reduced speech quality.

A PRI (Primary Rate Interface) is a telecommunication standard used in the Integrated Services Digital Network or ISDN, for carrying multiple DS0 voice and data transmissions between two physical locations. PRI was developed specifically for industrial or large quantity users. PRI is an industrial ISDN line while the Basic Rate Interface, or BRI, is used to cater to home and small enterprises. Which three characteristics apply to ISDN PRI? (Choose three)

A. PRI offers 20 B channels and 1 D channel
B. the D channel is 64 kbps
C. can carry data, voice, or video
D. can carry vendor-specific PBX features