Which two codes together make up the number that follows the E.164 recommendation numbering scheme? (Choose two)

The CC consists of one, two or three digits. It is what we add in order to access different countries and often prefixed with a +

The NDC is the code we often call the area code.

The SN is for telephone numbering. It is given by your phone operator.

E.164 numbers are limited to a maximum length of 15 digits.

For example, the North American Numbering Plan E.164 is as follows:

Answer C is also correct but just optional. E.164 Numbering Plan must have Country Code and Subscriber Code so A & B are the correct answers.

Which statement is true about only out-of-band signaling?

A. A signaling bit is robbed from each frame.

B. Signaling bits are sent in a special order in a dedicated signaling frame.

C. All signaling is directly associated with its corresponding voice frame.

D. All voice packets carry their own signaling.

Answers A C D are characteristics of Channel associated signaling (CAS) so they are not correct.

The D channel in ISDN is an example of which two signaling methods? (Choose two.)

There are two types of ISDN lines: Basic Rate ISDN (BRI) and Primary Rate ISDN (PRI). Both BRI and PRI types have the same 64kbps D channel that is used for call supervision. This D channel is dedicated for signaling only and contains all the necessary signaling for establishing call between two end-points so it is a kind of CCS signaling and out-of-band signaling.

In North America, which E&M signaling type is used most often for geographically separated equipment?

E&M Type I – This is the most common interface in North America.

E&M Type III – This is not commonly used in modern systems.

E&M Type IV – This is not supported by Cisco routers / gateways.

E&M Type V – Type V is symmetrical and allows two signaling nodes to be connected back-to-back. This is the most common interface type used outside of North America.

Although above information specifies E&M Type 1 is the most commonly used interface in North America but this type generates significant delay in the signaling operation when transmitting between geographically separated equipment and affects voice signal quality (because of significant inductance and capacitance of the long wires) so Type 2 is often used instead.

When the telephone handset is removed from the cradle, the circuit transitions to an off-hook state and there is a current flowing through the electrical loop. When the telephone network senses the off-hook state via the current flow, it provides a signal in the form of dial-tone that it is ready to accept the call. When making a call, the caller receives a ringback tone from the telephone switch, which alerts the caller that the telephone switch is sending ringing voltage to the called party. It is important to know that only the ringing that the recipient (the called party) hears is the supervisory signal; the ringback tone that the caller hears is simply a call-progress indicator and is not a supervisory signal.

What is the approximate frequency range of human speech?

Human speech ranges from 200 Hz to 9000 Hz but Nyquist cut the sampling frequency range to 4000 Hz to save bandwidth although this cut down the quality of voice too.

What is the process of assigning audio amplitude to a unique digital code word?

Quantization is the process of assigning a value from the voltage range based on the amplitude of each audio sample. Notice that the Voltage values are not evenly spaced. The spaces near the horizontal line are much closer than the ones at the two ends. This helps our ears distinguish common sounds more easily. 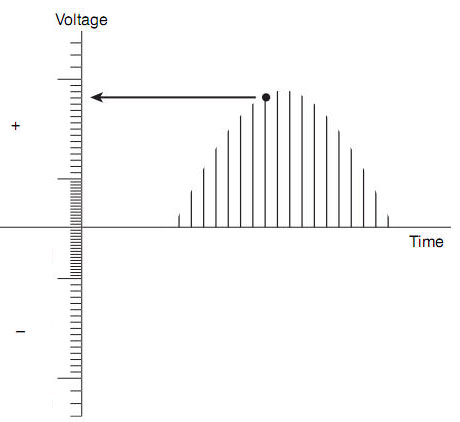 E.164 is an ITU-T recommendation which defines the international public telecommunication numbering plan used in the PSTN and some other data networks.

For the following items, which is the most common E&M type used outside North America?

A new business in Great Britain needs to have a PSTN connection that will handle a maximum of 30 inbound and outbound calls at any given time. The customer only has one slot available on the designated PSTN router. Which digital line type will you recommend?

The ISDN E1 PRI has 32 timeslots (channels). Each timeslot is 8 bits and has a data rate of 64,000 bits/second. Timeslot 0 is used for frame synchronization and alarms. Timeslot 16 is used for signaling so we can use 30 timeslots to carry calls.

ISDN T1 PRI only has 24 timeslots and can not support 30 simultaneous calls.

QSIG is just an ISDN based signaling protocol for signaling.