If you are not sure about Wireless, please read my Wireless tutorial and Basic Wireless Terminologies

A. Another signal source is producing energy on the channel in which you are trying to operate.
B. The desired signal reaches the receiving antenna via multiple paths, each of which has a different propagation delay and path loss.
C. A time-varying change in the path loss of a link with the time variance governed by the movement of objects in the environment, including the transmitter and receiver themselves.
D. A function of the frequency and should be provided in the cable specification by the vendor.
E. The minimum signal level for the receiver to be able to acceptably decode the information.
F. The time delay from the reception of the first instance of the signal until the last instance.

Fading is a time-varying change in the path loss of a link with the time variance governed by the movement of objects in the environment, including the transmitter and receiver themselves. For example, you might be sitting in a conference room with a wireless laptop and be connected to an AP in the hallway. If someone closes the door to the conference room, the path loss drops, resulting in a lower received signal level because the signal has to go through different paths to reach the destination. This scenario is a fade.

The different signal paths between a transmitter and a receiver correspond to different transmission times. For an identical signal pulse from the transmitter, multiple copies of signals are received at the receiver at different moments. The signals on shorter paths reach the receiver earlier than those on longer paths.

In wireless communications, signal fading is caused by multi-path effect. Multi-path effect means that a signal transmitted from a transmitter may have multiple copies traversing different paths to reach a receiver. Thus, at the receiver, the received signal should be the sum of all these multi-path signals. 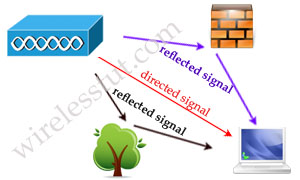 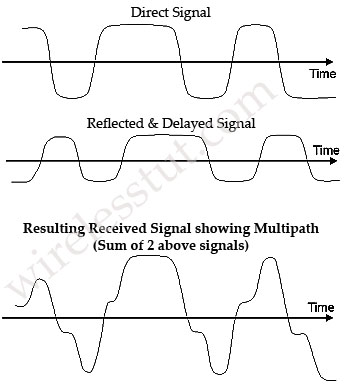 In what frequency band does 802.11n operate in?

Effective Isotropic Radiated Power (EIRP) is a way to measure the amount of energy radiated from an antenna. EIRP is calculated using the following formula:

+ Transmitter output power: the total power radiated by the antenna.
+ Cable loss: when an access point sends energy to an antenna to be radiated, a cable might exist between the two. A certain degree of loss in energy is expected to occur in the cable.
+ Antenna gain: To counteract cable loss, an antenna adds gain, thus increasing the energy level.

What increases bandwidth and resists multipath problems by carrying data in subcarriers?

What is derived from measuring the RF duty cycle?

Duty cycle is a percentage, and is directly related to RF utilization. If something other than a Wi-Fi radio is transmitting on a channel, then a Wi-Fi radio can’t use the channel until it’s free. So duty cycle tells us how often (what percentage of time) the channel is in use by something that is seen as noise by the Wi-Fi network.

A. the point of access
B. the machine in the network that keeps a list of conditions
C. the machine that attempts to access the network
D. the device that performs the authentication

What three roles are defined by 802.1X? (Choose three)

Which modulation technique allows you to achieve a data rate of 54Mb/s in the 2.4GHz-band?

Quadrature Amplitude Modulation (QAM) is a method of combining two amplitude-modulated (AM) signals into a single channel, thereby doubling the effective bandwidth. In a QAM signal, there are two carriers, each having the same frequency but differing in phase by 90 degrees (so they are called quadrature carriers). Mathematically, one of the signals can be represented by a sine wave, and the other by a cosine wave. The two modulated carriers are combined at the source for transmission. At the destination, the carriers are separated, the data is extracted from each, and then the data is combined into the original modulating information.